How to use Metrics description
×

How to use interactive map

How to give credit to CleverMaps in your article or post

You can embed the map via iframe or you can publish the link. Posting screenshots is also recommended. Please note that when using iframe, the window has to be big enough to accommodate the complex map.

To finetune your selections, edit the filters ( 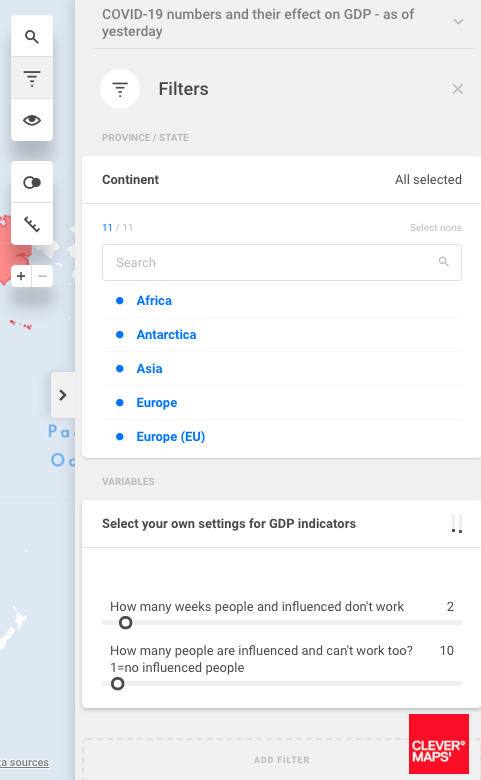 To display regional data for some countries (e.g. China), change the visualisation mode to dot-map

Or switch to different time period.

There are another two views in the application. You can switch between the views using menu in the upper right part of the screen. 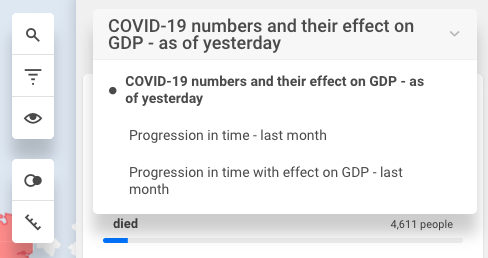 NOTE: This project is work in progress and we will be adding new data and views.

This document describes the statistical indicators selectable in the dashboard of Clevermaps. Data sources are described in a separate document. To repeat the obvious, all statistics here are based on officially reported cases, which are subject to national policies on testing, reporting, etc.

This simply represents the total cumulative figures since the beginning of the outbreak. By definition these can never go down, and their use in the media tends to overstate the problem.

The total figure “Confirmed” (which counts only officially reported cases) is decomposed into three components which can be displayed. People with confirmed virus can only now exist in three states:

Large countries will tend to have larger numbers of infected people. To assess the relative degree of infection in the country, the next two indicators measure the number of ever-confirmed or still-infected people per 1 million of the country’s population.

These figures are much more representative of the relative size of the problem in the country.

This is an indicator of the state of the war on the virus, currently being won by humans (positive number) or by the virus (negative number)

Think of the number of currently infected as a sink which has one inflow (newly confirmed) and two outflows: one good (recovered) and one bad (died). If the good outflow (recovered) is greater than the sum of those still in the sink and those who have died, the situation is improving (indicated by a positive number for the difference). Otherwise (with a negative number) the size of the problem is still growing, bad outcomes (still infected plus dead) are growing faster than good outcomes (recovered).

These indicators illustrate the threat of the virus on those who have contracted it.

Case fatality rate shows how many of those who have contracted the virus have died.

Recovery rate shows how many of those who have contracted the virus have recovered.

(The remainder is, naturally, still infected).

The last four epidemiological indicators are equivalent to the first four, but only show the change over last day in the number of confirmed cases, decomposed into those recovered, still infected, or dead.

These indicators offer a better picture on the dynamics of the spread, worldwide or in individual countries

As a unique feature of the Clevermaps system (built to analyse economic, demographic and other data geographically) is the attempt at estimating the economic costs of the disease. Same measures are provided for either the total cumulative numbers of EVER infected, or the current numbers of STILL infected. The user decides whether they are interested in total costs or current costs.

Naturally, these are subject to many assumptions. Some of them we have hard-coded into the system, others can be adjusted in the filters section.

We measure the standard economic output of an economy by its GDP. In the words Anatoly Dyatlov, this is “not great, but not terrible”. GDP obviously misses many things out and counts bads as goods, but it is the best measure we have to date. Currently we take latest figures for GDP per capita in current US$ from the World Bank. Soon we will also implement a reliable PPP estimate.

The user can adjust

Then we simply calculate how much of standard per capita GDP these people will “fail to produce”.

Naturally, many of the isolated people can still work. Similarly, not all people in isolation will be taken out of the productive part of the economy (e.g. pensioners), but though they might not be producers, they still would have been consumers.

This number represents the percentage of GDP lost should the infected people (or others that replace the cured ones) stay from work for the whole year. In a way, it is an annualized number of the previous indicator.

For the sake of completeness we also show the standard GDP figure used for these calculations.